Creative input was sought from the craftsmen themselves, who worked together with designers in the shops and studios that were built for them on the site. Glencairn, above all a home, was also designed to house Pitcairn’s outstanding collection of medieval objects, which were purchased as inspirational models for the artists who worked on the Cathedral.

On today’s installment of Kristine Robinson’s Interiors, I’d like to share my photographs of the imposing Glencairn Mansion, which is part of the National Historic District created in Bryn Athyn, Pennsylvania on October 6th, 2008.

I recently spent a lovely July Morning, strolling throughout the grounds of three magnificent historic sites (the Bryn Athyn Cathedral, the Glencairn mansion, and the Cairnwood mansion). Historic sites such as these are a constant source of inspiration for my work as an interior designer and the opportunity to visit such architectural treasures brings me great joy!

Glencairn, seen at the left, and Cairnwood, at the right, were the home to Raymond and John Pitcairn respectively. The son and his father were billionaires whose fortune was derived from control of the Pittsburgh Plate Glass Company.

Glencairn was built between 1928 and 1939. It was once the home of Raymond and Mildred (Glenn) Pitcairn and their children.

Today the mansion serves as a museum of religious art and history. Glencairn Museum educates visitors about the history of religion, using art and artifacts from a variety of cultures and time periods–most of which were collected throughout the lifetime of John and his son, Raymond Pitcairn. Religious life through the ages is presented by means of a remarkable collection illustrating religions as varied as ancient Egyptian, ancient Greek and Roman, medieval Christian, Islamic, Asian, and American Indian. Various cultural events are also held in the great hall of Glencairn (the acoustics are fabulous for musical performances!). 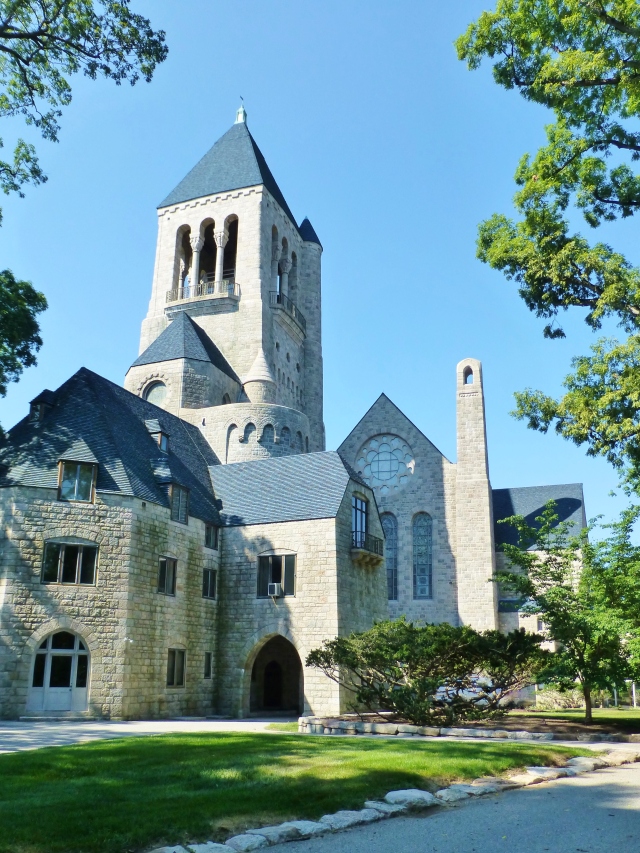 This is the view of Glencairn seen from the driveway. The impressive tower looms above the structure. Views from the top are outstanding!

This photograph shows a detail of the ornamental stone-work on the mansion. Construction was completed by the same craftspeople that built the Cathedral.

A beautiful terrace pavilion is located at one corner of the stone mansion. It features beautiful plantings and an amazing view of the Cathedral below. This is one of my favorite spots at Glencairn.

The view of the Cathedral down the hill from Glencairn. 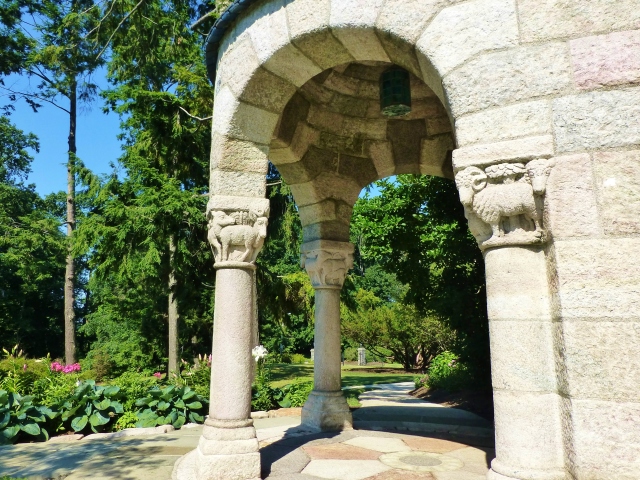 The website for the Bryn Athyn Historic District states that, “Glencairn was built by Raymond Pitcairn (1885-1966), in a style based on medieval Romanesque architecture. Pitcairn, who had no formal training in architecture, had previously supervised the construction of Bryn Athyn Cathedral, a Gothic and Romanesque style complex. The design of both buildings evolved gradually, relying on scale and full-sized plaster models rather than on predetermined architectural plans. Creative input was sought from the craftsmen themselves, who worked together with designers in the shops and studios that were built for them on the site. Glencairn, above all a home, was also designed to house Pitcairn’s outstanding collection of medieval objects, which were purchased as inspirational models for the artists who worked on the Cathedral.”

A ‘selfie’ I took of my reflection in one of the massive first story windows at Glencairn. Notice the stone relief carvings of birds at the top corners of the window and another view of the beautiful pavilion reflected behind me.

The Museum’s first floor, including the Great Hall, Upper Hall, Bird Room, and the current temporary exhibition, is open free of charge for self-guided viewing on Saturdays from 1:00 to 4:30 pm. For more information about the Glencairn Castle and historic tours, visit their website: http://www.glencairnmuseum.org/
The Bryn Athyn National Historic District also has its own informative site: http://bahistoricdistrict.org/ 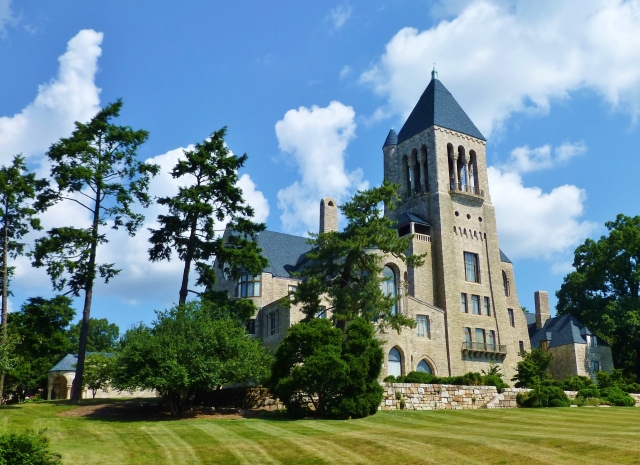 A final look at the picturesque ‘Castle’ called Glencairn. I hope to share some interior photographs soon.

Until then, I hope you’ll take the time to leave me some feedback in the comments section…I love to hear from you! And please tell everyone you know about Kristine Robinson’s Blog–I need all the friends I can get!